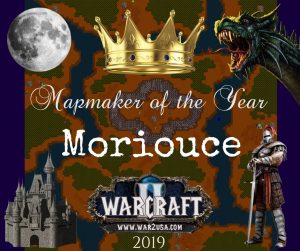 Moriouce is a longtime Warcraft 2 fan from Sweden. He has been creating his own maps on and off for 20 years. His map-making motto is “If it looks good, it plays good.”

The players at War2USA really appreciate and enjoy the quality maps Moriouce has gifted us this year! Thank you Moriouce!

8th Lake The battle rages around a mysterious lake which shores are littered with the ruins of long lost empires.

Arena by Moriouce This is an Arena-style map. All players start with 6 Farms, 2 Barracks, 1 Mage Tower, Lumber mill, Blacksmith, Stables and Church. 30 000 gold and 5 000 lumber. To this you also have 3 transports to ferry your troops to the arena. Last man standing in the Circle of Power in the middle of the Arena is the winner. All upgrades and training time has been greatly reduced.

Castles In this once-serene land rule eight lords that have come to despise each other. By alliance and deceit will learn who is fit to rule supreme.

El Dorado The lost city of El Dorado contains both treasures and dangers. This is also a test to see how rescuble buildings work in multiplayer. Can any player take control of them?

Regions is a map with three different regions. The mountains in the northeast has lots of gold and some lumber. The great forest in the west has near infinite lumber but is low on gold, easy to wallin and defend though. And the southern plains got average gold and has only small woods. What region will be your home and will you be content or fight for new lands?

Rift Valley A larger version of Down at the River but for 6 players. Only one way leads through the valley from one side to the other.

Time for Strife Is an old concept made fresh. With different ways to divide the players from start each position comes with pros and cons. And your closest neighbor might not be your first concern. The map can look maze-like at first glance but it is more open and straightt forward than it looks. Many hidden expos to explore as well.

Twin Peninsula This 2 player map is larger than the sum of its parts but there are some shortcuts and tricks to use. There are some towers for each tower from start so run it as you wish.

Vojnagrad is the abandoned capital of some ancient kingdom. Now eight lords gather to secure dominance over its forlorn riches. The plains around Vojnagrad are low on gold so you need to team up if you want to hold Vojnagrad. The map is inspired by the actual Volga at the site for Volgograd, former Stalingrad.

Warmongers 8 warring lords battle at this river crossing. The quarters invites for some really intense games since the map is 96×96.

Frozen Shores, Sea of Rye and Mimers Eye are maps where I have changed the stats of units and upgrades.

And what are these changes? They are the same on all three maps. First of all HP has been greatly reduced on all living units. Grunts have 12 and footmen have 10 etc. Humans also got more percing damage to start with.

One big differens between equal units are Knight and Ogres where Knights have 25HP and and retain all other stats. The Ogre instead has 40HP, 0 armour and almost no peircing damage, which make them a quite easy match for Knights before bloodlust. But then the Grunt has a higher damage that footmen to balance this. Grunts can find their place even in late game to fend of Knights. You will find that the Ogres change quite substasialy as they are turned into ogre-mages.

Ballistas do less damage than catapults but got a longer range but Orc Towers are less sturdy and with a slight decrease in cost and buildtime.

Dragons and Gryphons are two Winners with these Changes since they have not been given that big reduction in HP and a small increase in damage and therefor are more powerful than ever and hopefully can see more use on these maps.

All these Changes makes macig even more powerfull and because of this magic upgrades are now more expensive. To research Blizzard/death and decay you must pay 5000gold! But still, Fireball and Death Coil can level quite large armies on their own as it is. Just Think of Death Coil split and drain the Life from 9 footmen in one go! Ouch! Then Mages and Death Knights are more expensive know and takes longer time to train. Hope you enjoy and please tell us if it keeps the overall balance of the game or not.

Have fun everyone and please comment on how well they work!

Across The Brook – I like the dark shading, tree shapes, and tree sparseness. Expect mainlands to look fairly empty and wide open which is a buff to orcs. Though overall orcs are hurt on this map and River Forks due to the thin rivers. This map will play well any format. One of the better big game map options on low resources.

Far Side Of The River – Love the artwork you’ve done here between the winding tree lines, dirty shallow lakes, and asymmetricalness. A well-balanced amalgam of several maps. Interesting choke points staggered around the map. Players have options here which creates for dynamic matches.

Frozen Blood is a relative of A Continent to Explore. FB won’t requiring as much rushing in 2v2 than CTE. An excellent 1v1 or 2v2 map. 3v3+ expect rush-heavy bouts like many open land winter slashers.

River Forks – Excellent 1s, FFA, and low resources too. Map control will win the game. Dualing is a viable choice. Top left should be expo priority for black and white as it cannot be DK’d. I dig the ice swirl in the center of the map. There is a built-in 3-player River Fork, make sure not to confuse the two when you host this.

Time For Strife – Like Warmongers, a difficult concept to design. Visually one of the better maps I’ve seen. Your dark shading enhances the elegant tree lines; a recurring theme of yours. The terrain diversity allows for a lot of memorable nooks. The rock river forks are original. I love the varied mine amounts which add complexity. Top right quadrant is worth quite a bit as it is easiest to defend and hardest to DK. Purple must watch out for OTs. A couple players have an option to close. I like this for 2v2, 3v3, and FFA the most. Play games on varied tilesets to enjoy the beauty.

Warmongers – A difficult map to design logistically due to the cramped space. Expect a lot of OT, cats, and grunts in bigger games. This map will play unusually on fixed order as you are not neighbors with your ally. I would enjoy this most as a 1s, 2s, or FFA map.